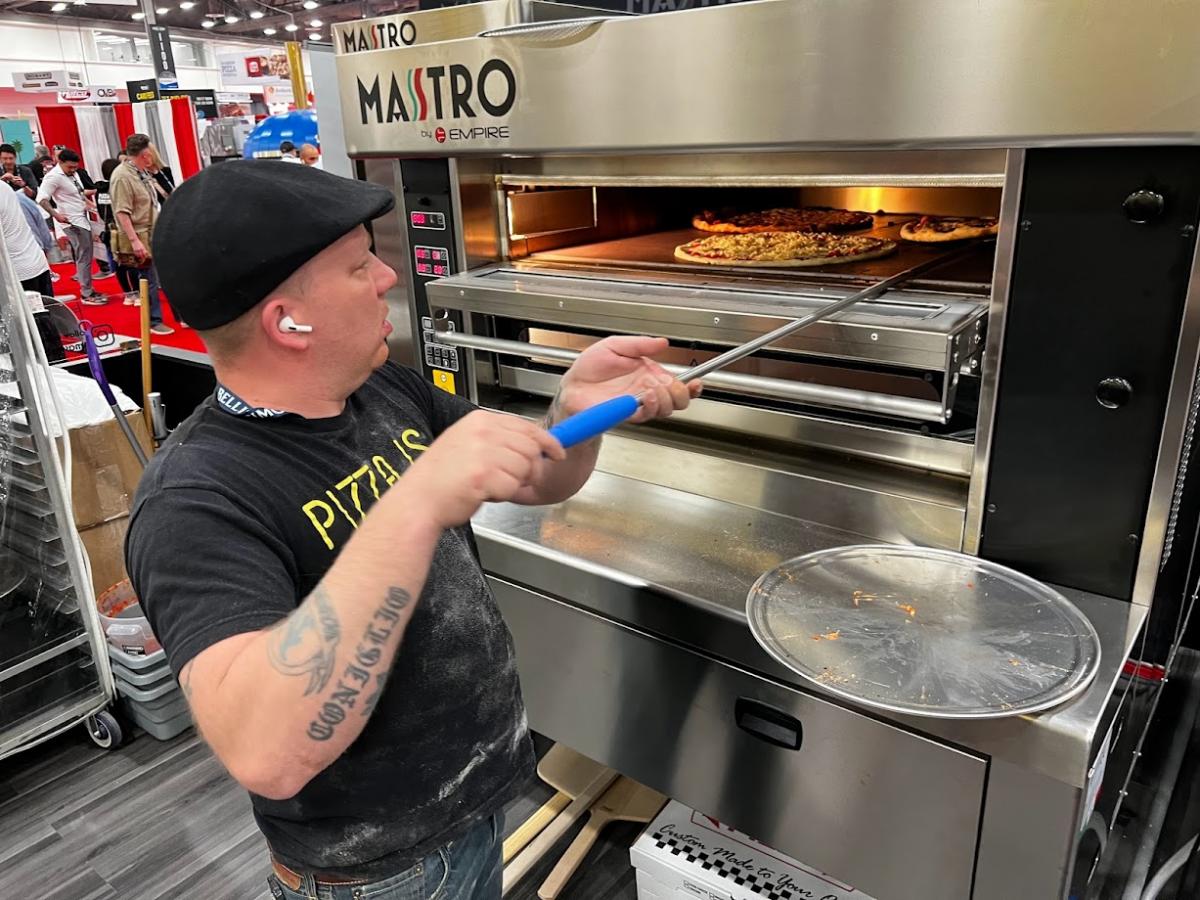 Empire Bakery Equipment has been in the baking industry for 45 years, and they are no stranger to helping provide businesses with quality equipment. The latest in Empire’s line of superior baking solutions is the MASTRO, a top-notch oven from our pizza production line that was recently introduced at The International Pizza Expo in Las Vegas in March.The greatest pizza makers in the world gathered at the Las Vegas Convention Center to see the latest and greatest equipment and ingredients in the pizza industry.

Empire Bakery Equipment, a first-time exhibitor at the show, made a lasting first impression. Those who stopped by the MASTRO by Empire booth were greeted by the beautiful sights and smells of the best pizza at the show. Taking center stage at the booth was Empire’s new MASTRO industrial pizza oven. The oven was being manned by some of the greatest pizzaiolos in the industry headed up by the pizza master and 11-time pizza champion himself, Nino Coniglio.

The MASTRO Pizza Oven impressed its audience with its ability to maintain high temperatures and produce the perfect bake all day long as Empire’s booth produced roughly 250+ pizzas each day. The ovens’ ability to retain such and even heat all day long, even with the doors being opened frequently, is due to its increased thermal mass. The MASTRO Pizza Oven features Mannesmann steam tubes that run throughout the oven to provide even heat to the product zones. The oven also features high-quality refractory brick baking surfaces for the perfect pizza bake each and every time.

The MASTRO Pizza Oven was designed to replicate the quality of old-world traditional coal-fired pizza ovens. However, unlike the traditional ovens and other modern-day pizza ovens, the MASTRO Pizza Oven uses a single burner system that uses less energy. In fact, the MASTRO uses fewer BTU’s than a regular 4-burner stove! The quality of this oven was proven in the perfect pizzas being produced at the show and the amazed looks on the patron's faces.

Empire’s new pizza line is more than just an innovative new oven. The MASTRO line features a spiral dough mixer and production equipment that can both divide and round your pizza dough in a fraction of the time it takes you to complete manually. The IRIS Spiral Dough Kneader uses its coordinated 2-speed spiral and bowl rotation system to provide optimal ingredient blending and dough development. This mixer was a fan favorite amongst the pizzaiolos at the Pizza Expo. Chefs from all over the show floor were coming by to prep their pizza doughs for the competition or to bake off at their booths.

Among the MASTRO Dough Production Equipment were the SQ Square Dough Divider, the SPA Pizza Dough Divider Rounder, and the BM-1000 Pizza Dough Rounder. The production equipment is designed to save pizzerias time, money and labor. Empire worked with many pizzerias and they understand how labor and time-intensive manually measuring, dividing and moulding pizza dough can be. Add the fact that good help is hard to find these days and dough production for a pizzeria becomes a bigger problem than it has to be. With Empire’s new MASTRO line of Dough Production Equipment, pizzerias can now produce hundreds of perfect and consistent dough balls in minutes.

Empire could not have asked for a better launch of their new pizza line. The Pizza Expo was a success and there was a buzz around the MASTRO booth. Empire is proud to have put together an oven that can produce a high-quality product in the busiest of environments and a line of production equipment that will save pizzerias time and money. So, when you are looking to upgrade your oven or mixer or looking to speed up and simplify your pizza dough ball production, remember the MASTRO name and give us a call.